The seminar on “WeMEN Campaign in support of Gender Equality”

The seminar on “WeMEN Campaign in support of Gender Equality”

WeMEN in Support of Gender Equality

To mark 16 Days of Activism

Topic of the Seminar: WeMEN in support of Gender Equality

Aim of the Seminar: Seminar was organized to mark 16 DAYS OF ACTIVISM to end violence against women. Aim of the seminar was to introduce WeMEN campaign in Delhi and engage with young boys and men in support of gender equality.

President Indialogue Foundation, Bilal Acikgoz gave the inaugural address. He said that Indialogue foundation is an action-oriented international dialogue and peace organization, established through imagination and fortune of a group of Turkish people. He said foundation is inspired by sensible and spiritual thoughts of the eminent scholars and spiritual leaders of the world. Its objectives are to champion proactive studies, to pioneer international, intercultural and interfaith dialogue initiatives and to promote universal values as love, respect, harmony, co-existence, cooperation, care and peace. He further said that Indialogue Foundation envisions eradicating polarization, animosity and prejudice among communities and groups through its activities, and said “woman empowerment is one of the important global issues. Without gender equality, peace and development is impossible”. 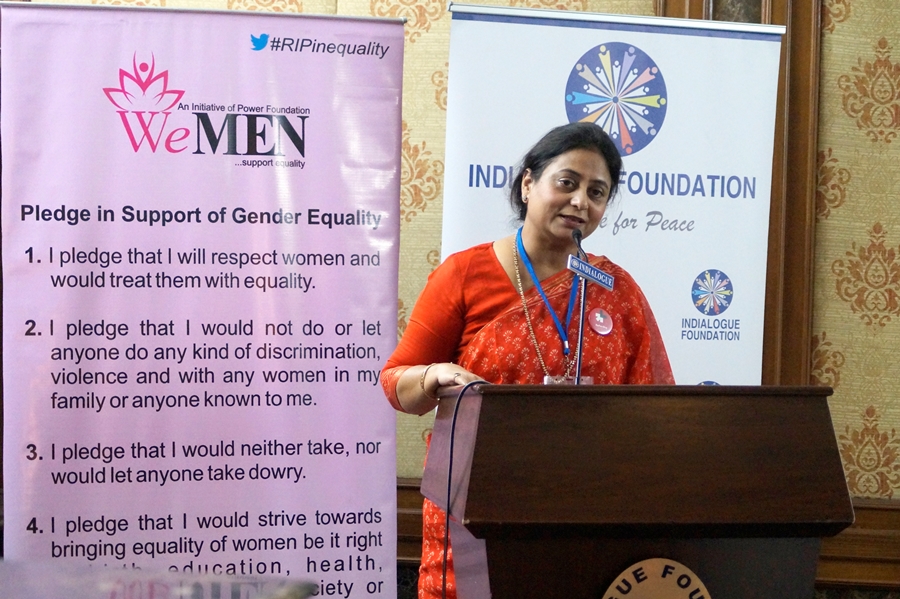 support of Gender Equality, and said “We all shouldorange our world for 16 days to show solidarity towards women’s movement”. She further explained that this seminar is an endeavor of POWER Foundation and Indialogue Foundation to mark 16 Days Activism to end violence against woman. Appreciating the partnership for the campaign, Ms Shamina Shafiq said that since the aim of the Indialogue Foundation is to promote peace and harmony, working towards empowering women should be a major component of the effort; if women are treated equally, there will be inner peace and subsequently peace in homes and then the society. Hence she expressed her hope for long term partnership with Indialogue Foundation which is contributing in building peace. Introducing WeMEN Campaign, she said that it’s a unique campaign which aims at engaging young men in support of gender equality. She added that through WeMEN Campaign, POWER FOUNDATION aims to promote gender equality; by targeting men and boys in the society and transforming them into ‘Change makers enabling Gender Equality.

An interactive session with the youth, moderated by Ms Shamina Shafiq brought fresh ideas and pertinent questions to the table. Couple of young boys and girls from the audience shared their thoughts and ideas on WeMEN in support of gender equality. It was encouraging to witness young men from different universities and academic background raising concerns, issues and giving suggestions. 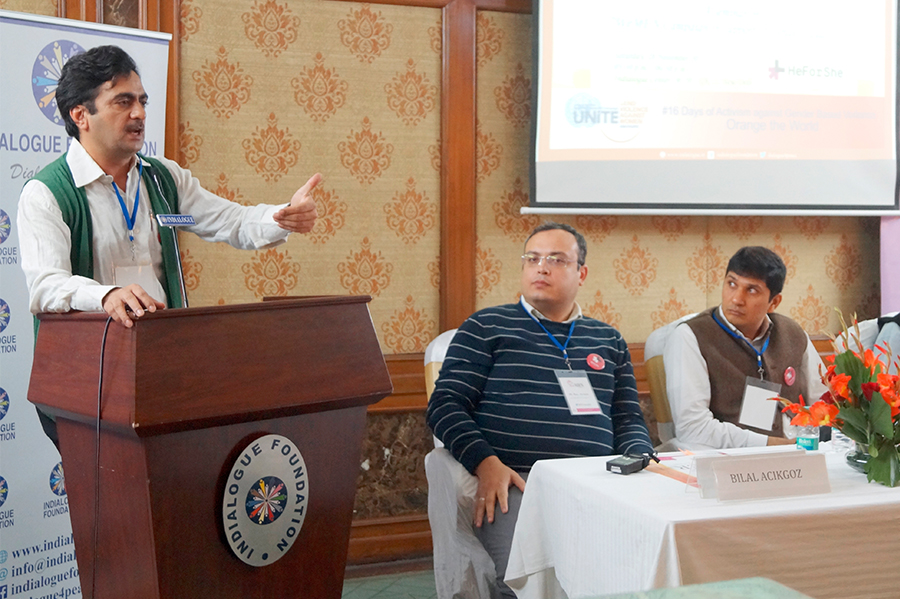 He emphasized on developing new kind of collective conscience to practice voluntary give and take of kindness, of power in relationships and also voluntarily giving up privileges being enjoyed mostly by men. He said, “Response of law to inequalities or brutalities has also to be monitored. We are heading towards a system where brutality of individual is being responded by more brutal (but sanctioned) action by the state”. He concluded by emphasizing on the role religion can play in improving power dynamics and inequalities of our society and said, “We need to uncorrupt all practical /lived part of all religions.” 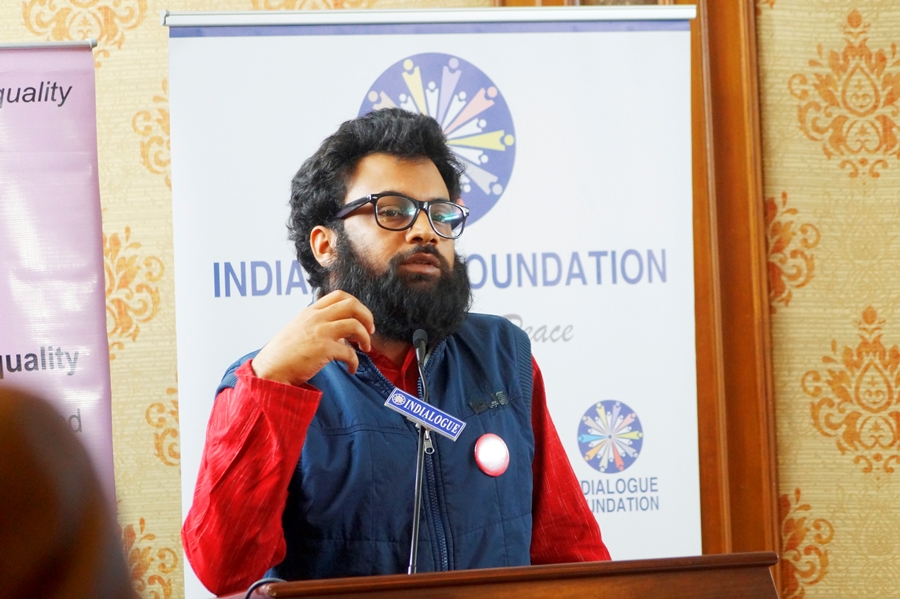 Alok Dixit is a journalist turned social activist. His works includes campaigning against the censorship on the online media    and to help acid survivors to live a life free of violence. With his demand of free and open internet. Mr Alok is creating a nationwide awareness among the youth through his writings and peaceful protests. He is advocating for the protection of freedom of expression and human rights by engaging communities and supporting people’s voices around the world. He is also working hand in hand with government, donors, media, NGOs, celebrities and students to help acid attack survivors rebuild their lives and to prevent further attack. Mr Alok shared many interesting aspects and experiences. He stressed, that in most of the cases of violence against women, accused is not a criminal by nature, but a person who does not know how to deal with rejection or how important it is to respect a woman.. Mr Alok Dixit said, “We need to focus on parvarish and emphasize on the role of a father. As society and especially as men we have to unlearn many things”. He also opined that if one closely looks at gender dynamics, one can easily conclude that there are number of things that have been unnecessarily taken upon themselves by men as their responsibility, men really need to empower women and unburden themselves as MEN. Taking the discussion further, he underlined that justice has become more like revenge instead of justice and peacefulness. He shared his fear and said that his inability to find answer to “why transition from gender unjust to gender just society is not peaceful,” disturbs him the most.

Mr Saurabh Bhadwaaj, a dynamic, young politician and MLA in Delhi for the Greater Kailash Constituency shared his 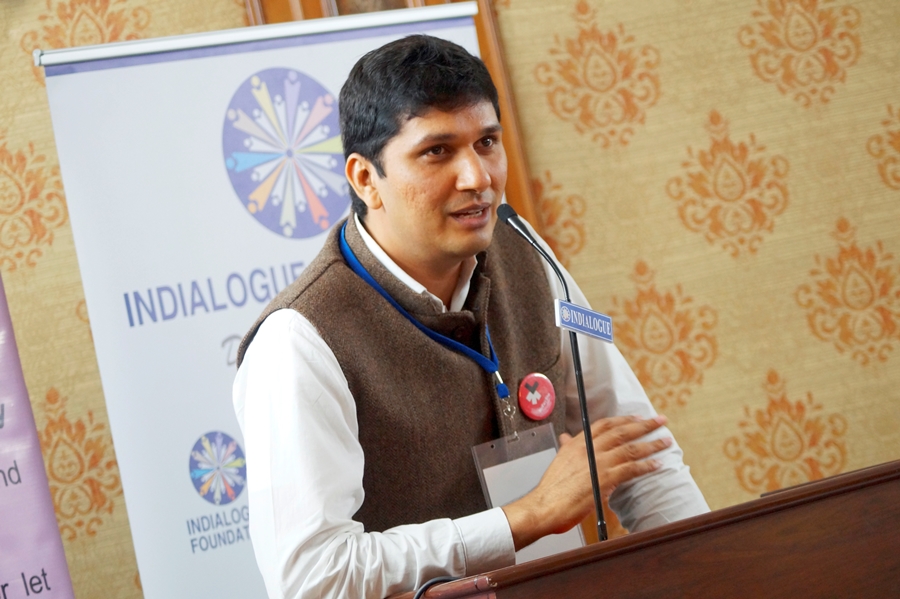 thoughts on how men of his generation have been viewing women’s empowerment. He shared, that teenager boys never realize that teasing girls is not an entertainment at all. He said “it’s high time we should start thinking from a woman’s perspective, if we are looking forward for an empowered society”. He further said “our movies and films have also contributed to objectification of women and this needs to be stopped.” He added that movies glorify voyeurism and stalking of girls which adds to the problem and leads to crime against women.

women is of utmost importance in our country,” he said. Pointing out the importance of development goals he said, “India has successfully achieved the Millennium Development Goals and is getting ready to work on Sustainable Development Goals; and there is no country which has moved forward without the support  and cooperation of women, to which, India is no exception.”

He elaborated on several aspects of women empowerment and stressed on –

He said that it is not the task of one organization or one agency to achieve gender equality. In-fact every individual, every community, think tanks, governmental, non-governmental organization need to come together and put their best efforts towards achievement of this goal. He supported the concerns raised by Mr Alok and Dr Ajay regarding importance of parvarish and voluntarily giving up of privileges & powers to balance dynamics of gender equality. He concluded by saying that without respecting women, a peaceful and developed country cannot be imagined. He congratulated organizers for this unique and one of its kind of campaign and encouraged young men to come forward and give active support to the cause of gender equality. He said “such campaigns remind us that it is the responsibility of each member of the society and all should stand up and actively support the cause.”

He also led the Pledge in support of gender equality for all those present, which was the most cherish able moment. 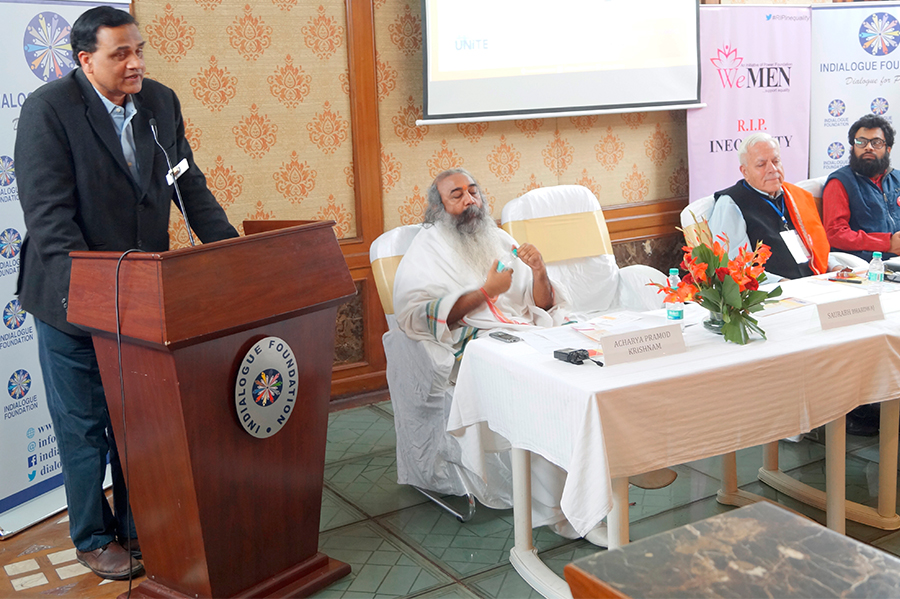 to the fact that how culturally we have been respectful towards women members of country; he quoted Mahatma Gandhi, Jawaharlal Nehru and many others. He presentation was a good insight into the history and cultural roots of India. He brought to light, the less talked about “Bal Pothi” By Mahatma Gandhi. 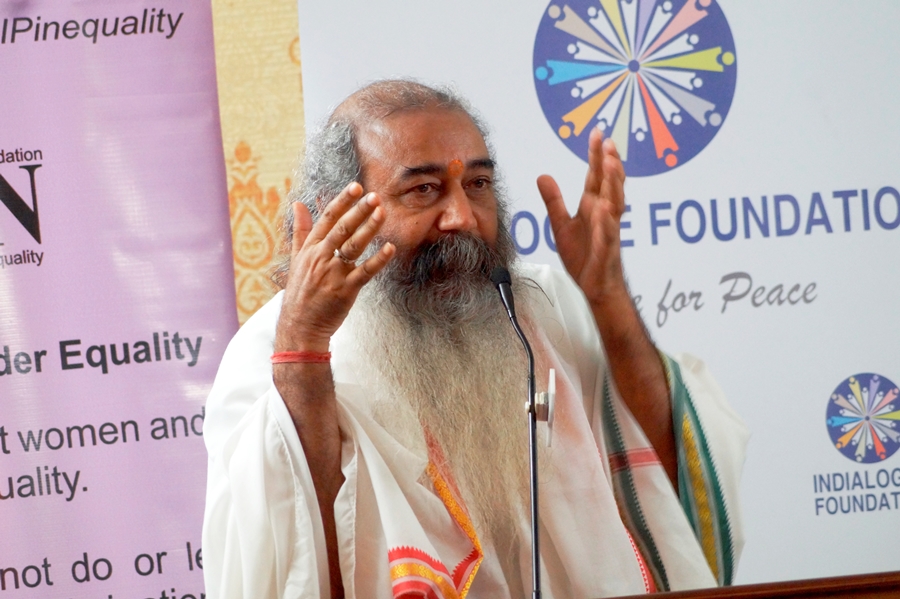 is important and shaping up of our future. He also shared his thoughts and agreed with other eminent speakers that without gender equality no peace and development is possible.

Ms Shamina Shafiq concluded and appreciated contribution of all the speakers and said that a diverse penal always invites an honest and open discussion. She thanked all the speakers for their different views. She said “it is always good to have a diverse group to come together, for a seminar as honest as like this, gives ample space to discuss and develop our thoughts and beliefs as speakers and participants too”. She also shared that fact that through such kind of seminars and talks POWER Foundation is aiming to create a balanced, peaceful and just society where no one feels as secondary to the other an there is a feeling of happiness and peace.

POWER Foundation and Indialogue Foundation share a common goal towards gender equality. In our journey towards a just and equal society, we shall organize a series of such seminars in Delhi, Mumbai, Hyderabad and Bangalore before the CONCLAVE:-Strong Male Voices Call for Gender Equality, on 7th March 2016, on the eve of International Women’s Day.

Posted on November 28, 2015 by admin
Posted in Past Events