Seminar on Islamic Perspective to Root out Violent Extremism

Seminar on Islamic Perspective to Root out Violent Extremism

Organized by Indialogue Foundation, a forum for dialogue and peace, On 26th of December 2015 in New Delhi.

Topic:  “Islamic Perspective to Root out Violent Extremism and Measures to Counter Radicalization”

Outcome of the Seminar:

Within overall framework the seminar’s specific focus was on:

The president of Indialogue Foundation, Bilal Acikgoz introduced the theme of the seminar and made the inaugural remark to signify the need for such dialogue in the first place and how such exercise can help in framing counter narrative collectively. He made it clear at the outset that Islam promotes harmonious coexistence and forbids violence in all its forms against innocent people. That fringe elements shouldn’t be allowed to represent Islam and Muslims. However, at the same time, the community should engage in introspection and course correction, away from conspiracy theories, denials and buck passing. 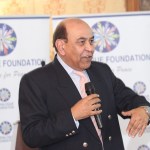 International Foundation and Delhi Policy Group, in his turn stood up away from podium mike, expressly to allow free flow of contents from his heart to the audience. And to ensure it further, he informed the audience, why he avoided any conscious preparation or any written notes.

He emphasised the importance of knowledge and communication as against ignorance and alienation. He came strongly with examples on the power of symbolism backed by right knowledge. He shared some of his success stories of de-alienating local people through promoting interactions during his service tenure in Kashmir as an army officer.

General Hasnain particularly pointed to 1979 as a watershed year in radicalization of Muslim youths. The year that marks the Iranian revolution, entry of Soviet army in Afghanistan, and others. 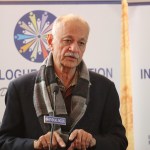 of Muslims in general worldwide during and after the fall of Ottomans (and rise of Europeans). He endorsed Indialogue’s view that the  community needs to engage in soul searching for its failures and to maintain distance from conspiracy theories.

Prof. Akhtarul Wasey (Padma Shri), a well known voice for justice and peace, began with the definition of   Jihad. Firstly, he presented  the actual meaning of the word in Arabic and then the mistranslated version in English  which means ‘fasasd’ in Arabic. He cited example  from the life of prophet Muhammed (pbuh), as to when war was  deemed necessary. He noted that the prophet always tried to resolve a  conflict through negotiation (in opponent’s  territory) and war was just to defend as a means of last resort, that is when imposed upon (in  home territory). 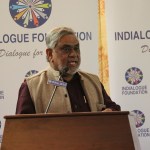 geography, particularly in post cold war era. He commended India’s role in promoting peace and order internationally. He added a note of caution about authentic sources of information about Islam and Muslims along other religions and dismissed both explicit and implicit tools of  everyday propaganda.

Prof. Wasey acknowledged and appreciated the works done by Hizmet for the humanity. He concluded by saying that religious pluralism is by design and desire of divine, and therefore, needs no alteration. 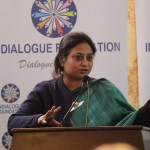 of previous speaker Prof. Akhtarul Wasey, that she looked up-to him for articulation on complex issues. Then she thanked organizers for the opportunity to add women’s perspective to the seminar. She observed from her own field experiences that radicalization affects family the most.

Mainstream media, she noted, provides significantly less space to women issues, much less to minority women issues and further less to Muslim women issues. There are already  gender biases against women in general, and they compound in case of minority women.

She asked for gender equality in practice, for example, allowing women in mosque for prayers as observed in many parts of the world. She advocated for more platforms for women’s intermingling, sharing and thereby growth. She alerted against regressive elements in the community who want to control and subjugate women in the name of religion as understood by them.

Finally she sought attention to move from dialogue to concrete action plans to bring desired change and underlined the critical role of civil society and media to educate and sensitize citizens and administration on issues of women in general and Muslim women in particular. 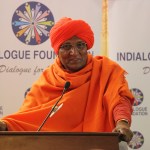 of Ms Shamina Shafiq and shared as to why he was known as male feminist to many.

He took off from reading an excerpts from an article on extremism by Fethullah Gulen, a renowned Islamic scholar from Turkey. The reading constituted many statements denouncing violence, in all its forms, from Islamic as well as humanist perspective. And that the core beliefs of Islam must be distinguished from dogmatism.

He observed that whole society has rotten irrespective of religion, that our religion is decided by the accident of our birth and not by our choice. We have lost the ability to question, to question practices around us. We, the so called good people, remain silent against all injustices around us, without thinking that it can turn one day on our face.

All are equal before God. We have created inequalities. Let us start with a common minimum program to fight against subtle terror like sati, untouchability, bonded labor, etc. He maintained that it is the responsibility of everyone to spread human values and make this planet a better place for all.

He concluded by congratulating PM Modi for his visit to Pakistan the day before to improve relations with the neighbor. 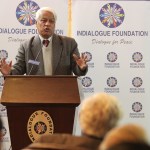 Grievances could be genuine or otherwise. Considering the availability of limited opportunities, genuine grievances are commonplace, irrespective of religion.

However, when the grievances are linked with religion or caste, it becomes dangerous for a pluralistic society as a whole. Such vulnerable lots can be easily exploited by vested interests.

Family for its proximity, he noted, happen to be in a right position to notice radicalization of its member at the earliest and can address the issue in time. Next comes, civil society that can play a critical role in engaging with such individuals. Government is least qualified in terms of knowledge, skills and capacity to deal each case with due diligence and in right perspective.

He maintained that the Western crusade paradigm is unfit in our reality to deal with the issue of radicalization.

Posted on December 27, 2015 by admin
Posted in Past Events