A two-day Gandhi Jayanti National Conference 2017 was held on 16th-17th October 2017 at Zakir Husain Delhi College, University of Delhi. The theme of the conference was “Revisiting Champaran: Challenges of Satyagraha in 21st Century”. It was jointly organised by Indialogue Foundation, Zakir Husain Delhi College (Morning & Evening) and Gandhi Smriti and Darshan Samiti. Vision India Research Centre (VIRC) was the Academic Partner for the event.

With the participation of 42 eminent speakers with diverse backgrounds from across the country and hundreds of students and academics in the audience, the conference was a huge success. Balmiki Prasad Singh, Mrinal Miri, Ramin Jahanbegloo, Yogendra Yadav, Mridula Mukherjee, Arvind Mohan, Ragini Nayak, S N Sahu, Hilal Ahmed, Kallol Bhattacherjee, Shakti Sinha and Shiv Visvanathan were some of the most notable names among the panellists.

Indialogue Foundation is a Delhi-based international peace and dialogue organisation working to promote intercultural and interfaith dialogue, community cohesion and proactive citizenship. It was established in 2005 by a group of Indian and Turkish nationals. We routinely organise conferences, panel discussions, seminars and other academic and cultural events on issues that we believe are necessary to achieve our aforementioned objectives.

As a premier educational institution of Delhi, Zakir Husain Delhi College which was previously known as Zakir Husain College, Anglo Arabic College and Delhi College traces its roots to the closing years of the 17th century. It was affiliated to Delhi University in 1925, and became one of its constituent degree colleges in 1929. Following the partition of India, the college was attacked and set on fire by incendiary mobs. Supported by Dr Zakir Husain and others, the Delhi College was revived as a non-denominational institution in 1948. As principal, the legendary Begg Saheb moulded the institution with a deep sense of its historical past, and a culture that even today gives it a distinctive quality.

Gandhi Smriti and Darshan Samiti (GSDS) was formed in September 1984 by the merger of Gandhi Darshan at Rajghat and Gandhi Smriti, at 5, Tees January Marg as an autonomous body, and is functioning under the constructive advice and financial support from the Ministry of Culture, Government of India. The Prime Minister of India is its Chairperson and it has a nominated body of senior Gandhians and representatives of various government departments to guide it in its activities. The basic aim and objective of the Samiti is to propagate the life, mission and thought of Mahatma Gandhi through various socio-educational and cultural programmes.

Vision India Research Centre (VIRC) is a non-profit and non-government organisation established under the Bharti Education and Development Society, Delhi (www.bhartisociety.org) which is registered with the Registrar of Societies, Delhi under the Societies Registration Act, 1860 vide registration no. S-24698 dated 24.08.1993. The VIRC is a ‘Think Tank’ dedicated to research and studies to explore constructive and practicable solutions to contemporary problems with futuristic approach. It provides a platform for eminent personalities, bureaucrats, academicians, professionals, journalists, social activists, students, upcoming intellectuals and enthusiastic men and women of all walks of life to come together, discuss and debate various issues pertaining to social, educational, economic and political development of India.

The two-day conference comprised of six Working Sessions apart from the Inaugural Session, the Plenary Session and the Valedictory Session. 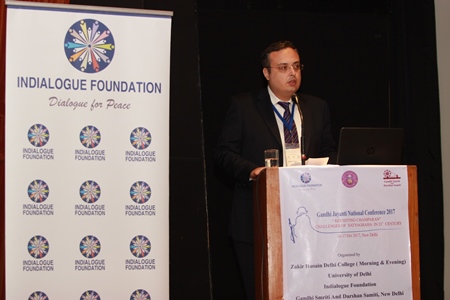 Addressing the audience Mr Singh said that Satyagraha was a unique experiment. He added that Champaran movement was not a solitary one, it created social awakening and led to basic education. He also pointed out that Gandhi convinced the British that they cannot exploit local peasants forever and have to provide them education. He averred that Champaran taught Indians how to empower themselves. 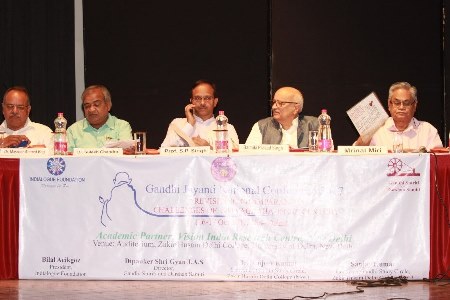 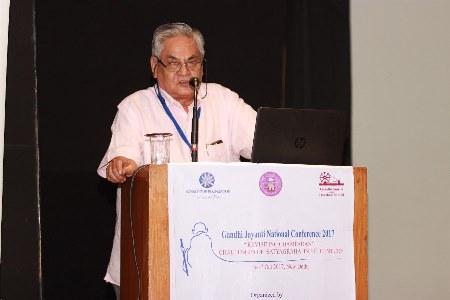 The Plenary Session was chaired by eminent political philosopher and Gandhian, Ramin Jahanbegloo, and was graced by distinguished speakers like Mridula Mukherjee, prominent Indian historian; and Yongendra Yadav, renowned social activist and psephologist. 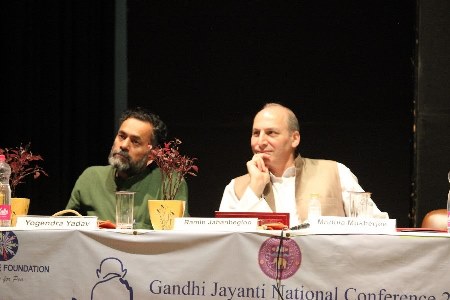 Leaving much of the assigned time to the speakers, in his short speech Mr Jahanbegloo said that in the age of Trump, Gandhi has become more relevant.

In her noteworthy and stimulating presentation, Ms Mukherjee started by saying that it is heartening that there are still many people who are interested in Champaran. She argued that a Satyagraha(s)/struggle(s) does not need to be violent or loud, and said that the Champaran Satyagraha is the perfect example of that.

She also said that the most important lesson to be learnt from the Champaran Satyagraha is the fact that legal may not always be legitimate. Being legal and being legitimate are two different things. Another important point she highlighted in her presentation was that non-violence is not a method by itself; it is the boundary within which politics should operate.

Amidst several rounds of applause during his eloquent speech, Mr Yadav said that if your blood does not boil, you cannot become Gandhi. Gandhi wouldn’t sit aside when there were riots between different communities; he would go and sit amidst it and say “I wouldn’t let it happen”, he added. 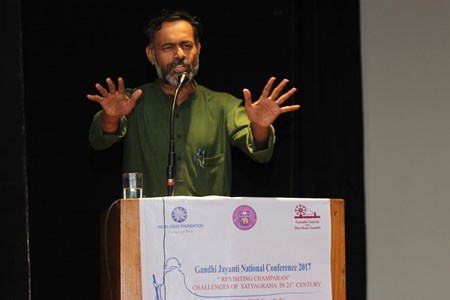 Mr Yadav recalled that Ram Manohar Lohia once said that government Gandhians and ashram Gandhians would destroy Gandhi, heretic Gandhians would promote him and his ideas. Heretics would question power and authorities and they won’t be compliant.

He added that Champaran represents three things about the British rule: colonialism, economic oppression and imposition of harmful cultivation of crops, and lamented that now this has just changed shape but the oppression continues. The MPs, MLAs and other government officials are doing the same. In order to understand the plight of farmers, he said, look at four things: income, investment, disasters and debts.

Taking his point further, he said farmers’ plight is recognised in reports but implementation of solutions requires political will which is conspicuously missing. He suggested that we need to empower farmers to create this political will in politicians.

He concluded his speech by saying that we always remember what not to do in Satyagraha but we don’t remember what to do. We need to overcome that tendency. 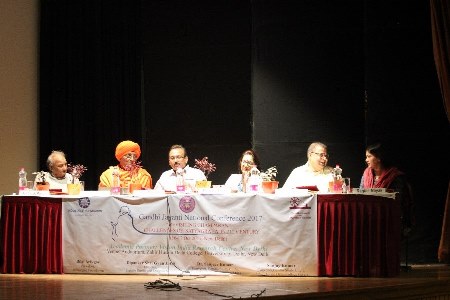 While touching upon different issues and adopting different approaches, all the panellists unanimously agreed on the fact that the conditions of farmers in Champaran today are not much different than that under the British rule, if not worse. 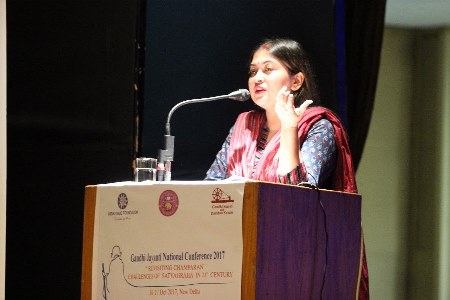 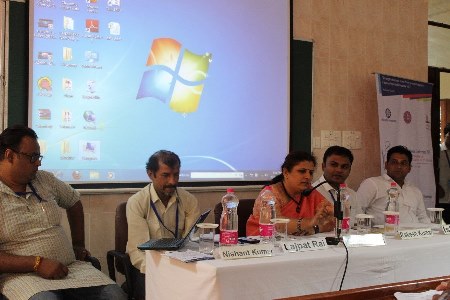 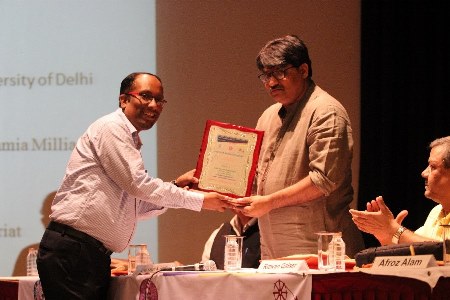 Prof Qaiser said that a lot of people have critiqued Hind Swarajya for being anti-progressive, but Gandhi insisted that everything that came from the West was not in the best interest of India. With Hind Swaraj, Gandhi wanted people to realise that they can revisit and reclaim their glorious past. Prof Qaiser asserted that Gandhi’s ideas were not static but dynamic.

Finally, he also said that philosophically Gandhi was opposed to the state being linked to any particular religion.

Drawing audience’s attention towards the pathetic condition of farmers in Champaran today, Mr Alam said during the British era peasants were not fired upon despite all the atrocities against them. They were not forced to suicide. But unfortunately it happens today. He warned that due to terrible conditions, farmers of Champaran are ready to join the Naxalite movement.

In his insightful presentation, Mr Sahu said that Champaran movement is important for the theory of justice. Though it was predominantly focused on the plight of farmers, it had integrated vision and scope. He pointed out that Gandhi started by breaking a law in Champaran which eventually led to the formation of a new law. 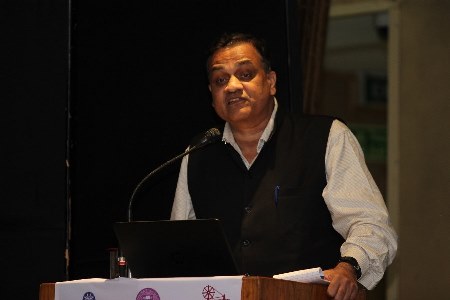 Finally, he also said that philosophically Gandhi was opposed to the state being linked to any particular religion.

Drawing audience’s attention towards the pathetic condition of farmers in Champaran today, Mr Alam said during the British era peasants were not fired upon despite all the atrocities against them. They were not forced to suicide. But unfortunately it happens today. He warned that due to terrible conditions, farmers of Champaran are ready to join the Naxalite movement.

In his insightful presentation, Mr Sahu said that Champaran movement is important for the theory of justice. Though it was predominantly focused on the plight of farmers, it had integrated vision and scope. He pointed out that Gandhi started by breaking a law in Champaran which eventually led to the formation of a new law. 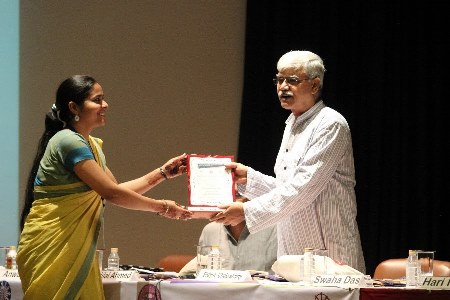 Prof Alam said that Gandhi becomes relevant today due to three factors: terrorism, inter or intra religious conflicts, and understanding that you will not have a dignified life unless you have access to the state.

With regards to Champaran Satyagraha, he said that it punctured that the idea that any movement has to be based on an ideology. Praising Gandhi for his transparency during his Satyagraha in Champaran he lamented that in the post-colonial world transparency has eroded in the name of national security. 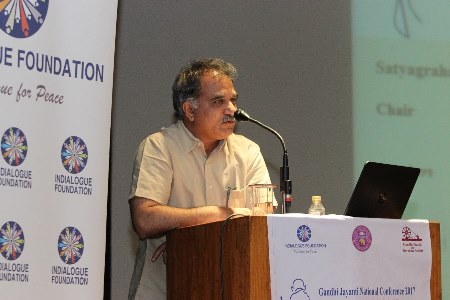 He concluded his presentation with the following quote of Gandhi: “By disobeying your law, I have obeyed the highest law of the land – the law of conscience.”

Satyagraha and Perspectives on Contemporary Conflicts and Peace 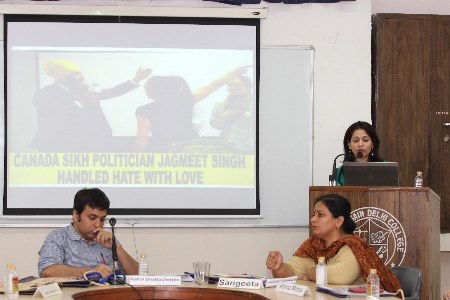 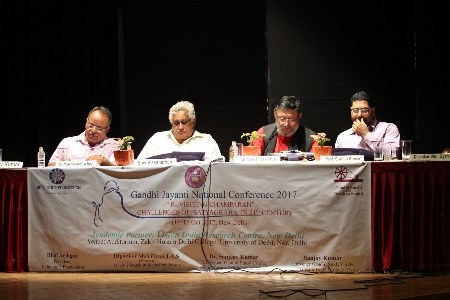 In his thought-provoking address Mr Visvanathan said that what is important about Champaran is not what is said about it, but what is not said about it. The most beautiful thing about Champaran is its rumours. He said that gossip of the peasants and the police records create Gandhi. To the surprise of many, he added that Raj Kumar Shukla is presented as a peasant but he was actually a money lender. 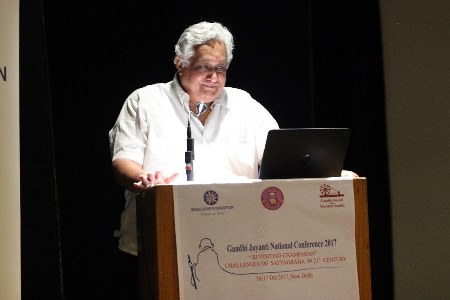 He argued that India sustains diversity and the Champaran movement starts a debate on how do we sustain diversity in India. He suggested that to know how poor peasants can create a great leader, we should look at Champaran. He concluded his remarks by arguing that Champaran is a debate, history closed it. 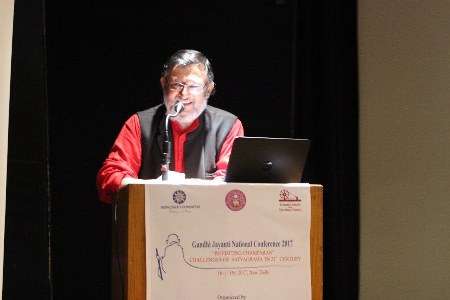 Posted on October 17, 2017 by admin
Posted in Past Events