Invitation to a Panel Discussion on “Security Crisis in West Asia: Is There A Way Out?”

Invitation to a Panel Discussion on “Security Crisis in West Asia: Is There A Way Out?”

The on-going crisis in a geo-strategically and economically important region of West Asia, having its roots in a political popular upsurge called as Arab spring which has initially been exaggerated as the path to a greater democratisation of the region is now grappling with a deadly upheavals of ethno – religious strife and “Hybrid” threats. Key regional and extra regional players have increasingly been drawn into the conflict both as victims on one hand and as protagonists on the other. Extra regional players like US, NATO and more importantly the dramatic entry of Russia into the Syrian scene as well as the spat between Russia and Turkey accelerated more complexities.  Glaring divide between regional players and competition to dominate the region multiplied its implications on regional security scenarios.  The outcome of Iran & P5+1 nuclear negotiation instigated rivalry between Saudi Arabia and Iran which in turn has further intensified the situation in the region. The intra-regional wars and civil war has threatened to alter the entire equilibrium in the region. With changing dynamics in the region as also likely on the backdrop of rising energy production in the United States the Americans seem eager to downsize their foreign entanglements.

Conditional probabilities and relative risks are making difficult to find a way out of given stalemate.  It is hardly implausible to imagine a protracted political and military deadlock to be resulted in even greater loss of life, population displacement, and physical destruction, coupled with more potentially destabilizing activities. What, then, could mitigate these risks? Is a breakthrough leading to a negotiated political settlement possible, and if so, what are the prerequisites for achieving it? Does inadequacy of existing Security Framework to meet regional security challenges need to evolve new security architecture? The panel discussion is expected to take up these questions in a more profound way and to discuss the ways out of the security crisis in West Asia.

The major themes to be discussed include the following:

Expected Outcome: the essence of panel discussion will be published online on Indialogue Foundation’s official website 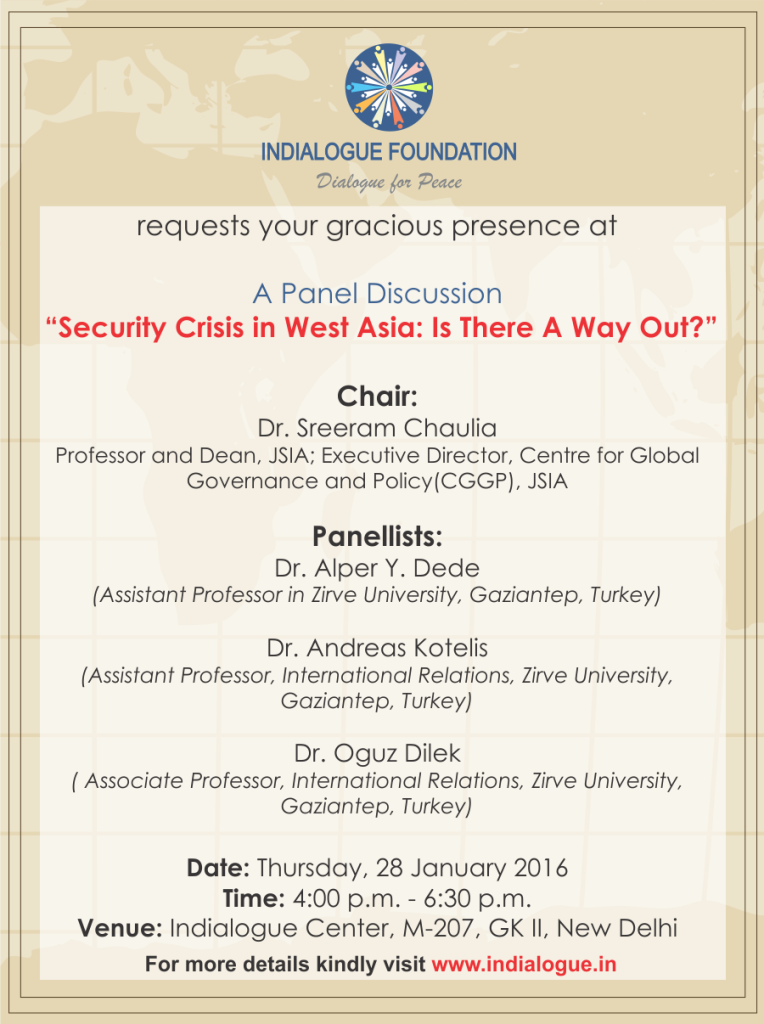 Detail of the panelists who have consented and wished to appear on the Panel;

Dr. Sreeram Chaulia is Professor , Dean and Executive Director of the Centre for Global Governance and Policy (CGGP) at the Jindal School of International Affairs of O.P. Jindal Global University. He holds a Doctorate (Ph.D.) and a Master of Arts (M.A.) in Political Science and International Relations from the Maxwell School of Citizenship and Public Affairs, Syracuse University, USA. He holds a Master of Science (MSc.) degree in History of International Relations at the London School of Economics and Political Science, UK. He was a Radhakrishnan British Chevening Scholar at the University of Oxford, UK, where he obtained a Bachelor of Arts (B.A.) in Modern History. He also has a Bachelor of Arts Honours (B.A. Hons.) from St. Stephen’s College, University of Delhi, India. Professor Chaulia’s areas of specialisation include diplomacy, foreign policy, comparative politics, international political economy, international organisations, armed conflict, humanitarian practices, and contemporary world history. He has over seven hundred and ten publications to his credit.  He is an advocate for freedom movements in Burma and Tibet and has written extensively about the problems of repression and human suffering under authoritarian regimes.

Dr. Alper Y. Dede received his MA degree from Fatih University, (Istanbul, Turkey). Upon completion of his M.A. thesis on democratization and civil society in Turkey, he enrolled into the Ph.D. program in comparative politics at Western Michigan University, Kalamazoo, MI, US. As a comparative political scientist, he tried to analyze how Islamists of Egypt and Turkey related to their governments under state control over religion. The title of his successful dissertation was “Islamism, State Control over Religion and Social Identity: Turkey and Egypt” Dr. Dede has worked in several academic institutions in the US until 2010, and since then he currently works as an assistant professor in Zirve University (Gaziantep, Turkey) at the department of Political Science and Public Administration. His research interests include social movements in the Middle East, Islamism, and Turkish Foreign Policy on the Middle East. Dr. Dede’s journal articles, articles in edited volumes and book chapters had been printed internationally.

Andreas Kotelis holds a PhD from the department of Political Science at Bilkent University, Turkey. His main research interest include Greek-Turkish relations, Turkish politics, conflict resolution, and track-II diplomacy. His dissertation focuses on relations between Turkey and Greece, and particularly on the successful and failed rapprochement cases that took place between 1930 and 1999 between these two states. As of September 2013 he is an assistant professor at the department of International Relations, Zirve University, Gaziantep, Turkey.

Posted on January 24, 2016 by admin
Posted in Announcements